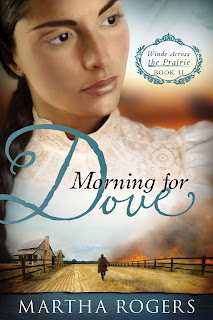 Set in the Oklahoma Territory in 1897, Luke Anderson is beginning to notice a beautiful girl in his community.  Unfortunately for him, his mother is dead set against the girl, because of her being half Indian.  His mother had survived an Indian attack on her family as a child, that killed all her family and her sister had been kidnapped, and was presumed to be dead also.  The horror and the pain of that has jaded her judgement and left her unable to forget or to forgive those who hurt her as a child.  That pours over into her prejudice against Dove, and her mother Emily.
Luke knows he is falling in love with Dove, but is unsure of how to handle his mother's pain and her distress.  As a Christian, he can see the unforgiveness that has her bound, and knows it is wrong, but he also knows he must honor his mother and father.
A land hungry rancher in the town, with no scruples begins stirring up trouble, and his son tries to attack Dove, but Luke defends her by knocking him out.  The troubles only intensify as more and things take place, all the while Luke is trying to come to terms with his feelings.
A book that is an easy read, and will keep your interest.  Definitely a book to share with others.  297 pages $10.99 US 4 stars

This book was provided for review purposes only.