See my Review of this Book, HERE 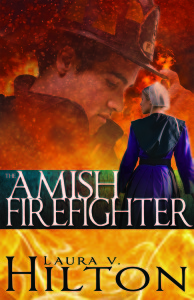 Purchase your copy of The Amish Firefighter here A Beautiful Young Woman Banished from Home Abigail Stutzman thought it was bad enough being dropped at the nearest bus station and sent to live several states away with some relatives she’d never even heard of, much less met. But now, just a week after her arrival in Jamesport, Missouri, she finds herself at the scene of a barn fire. An intentional barn fire. And all fingers are pointed at her. She’s desperate to prove her innocence and protect her reputation, but nobody’s making that easy to do. And God certainly doesn’t seem willing to help. A Brave Firefighter with an Agenda of His Own Sam Miller is in the process of turning over a new leaf. Determined to atone for the follies of his past, he is a volunteer firefighter, an EMT, and a doctor-in-training. With suspicious barn fires escalating, and the Miller family being among the victims, no one is more determined to see the perpetrators brought to justice than Sam. A Kindled Flame Neither One Could Have Anticipated When their paths first cross at the site of a barn burning, the emotional intensity rivals the warmth of the flames. Soon, they must decide whether this fire is one they should feed or fight. And they’ll discover that the truth can prove more dangerous than a blazing inferno.

Laura V. Hilton   Amish fiction lovers responded positively and immediately to Laura V. Hilton’s debut novel, Patchwork Dreams, when she burst on the scene in 2009 with her unique series, The Amish of Seymour, set in the tiny town of Seymour, in Webster County, Missouri. Fans of the genre immediately recognized Hilton’s insider knowledge, not only of the Webster County community, but Amish culture in general. Her natural speech and writing patterns, she says, are uniquely “Amish,” acquired from her Amish maternal grandparents. The Amish of Seymour, includes Patchwork Dreams, A Harvest of Hearts, and Promised to Another. Her second series, The Amish of Webster County, is comprised of Healing Love, Surrendered Love, and Awakened Love. A stand-alone title, A White Christmas in Webster County, was released in September 2014. The Birdhouse concluded Laura’s 2015 series, The Amish of Jamesport, includes The Snow Globe, The Postcard and The Birdhouse. Laura is a member of American Christian Fiction Writers and a professional book reviewer. Laura and her husband, Steve, have five children, whom Laura homeschools. The family makes their home in Arkansas. For more about Laura, her latest book, the books she’s written and those she’s reviewed: Laura Hilton’s Website:  www.lauravhilton.blogspot.com.

Unlike some authors, I am not a planner. I have a very vague idea of the story, of the series, and as soon as the characters step forward and introduce themselves I dive in and start writing. When I first began writing this series – New Beginnings in Jamesport – I knew Sammy Miller was going to be the hero. Readers started asking for Sammy’s story as soon as they read The Postcard where Sammy was the villain. Ouch. I’d never considered writing a story about a former villain. But just as David in The Postcard was reader requested, Sammy would be. Sammy is a very strong character and I knew he had to have a strong female lead character, one that wasn’t afraid to stand up to him and keep him under control. He is a leader, an EMT studying to be a paramedic, and a volunteer firefighter. The female lead, Abigail, is thrown into Jamesport without warning. Her step-father takes her to the bus station and sends her away and she doesn’t even know why! When she is met at the bus station by an aunt and uncle she didn’t even know existed, she is thrown into the middle of several mysteries, including barn fires set by arsonists. And she is the main suspect. The whole New Beginnings in Jamesport series, while considered a continuation of The Amish of Jamesport series due to Sammy being the hero, is set around Amish starting over in Jamesport. The second book The Amish Wanderer is about a former resident of Jamesport hitchhiking across the country to get to his Mennonite uncle’s house in Pennsylvania. Silas is desperate to escape from his dysfunctional family for several reasons. But he cannot stay in Jamesport because someone is out to kill him. When he stumbles upon another mystery within hours of his arrival, what choice does he have but to stick around for awhile? God gave me the verses for all three books in the Amish of Jamesport series The Amish Firefighter, The Amish Wanderer and the yet untitled third book (My books all stand alone) before I started writing them, which is unusual. He usually reveals these things slowly to me, as I need to know. The verse for The Amish Firefighter is Isaiah 43:2-4 and the verse for The Amish Wanderer is Romans 8:38-39. The third book’s verse is 2 Corinthians 4:8. It is tentatively titled The Amish Accountant, but most people think accountants are boring, and his real profession is a clockmaker. But The Amish Clockmaker has already been taken by another author. So we shall see what the wonderful Whitaker House team will come up with. It is about another young Amish woman, Lydia, who needs a “safe haven.” So her parents send her to live with her Mennonite aunt and uncle in Jamesport. It doesn’t exactly work out as planned, as the aunt and uncle leave for a foreign mission trip immediately, leaving Lydia acting manager of a gift shop and living in an all electric apartment. Before her aunt leaves, she tells Lydia’s secrets to her best friend. But did she tell all of them or some of them? And the best friend’s son, Caleb (the clockmaker) is acting as accountant for the gift shop. And what about Caleb’s carefully kept secret? When Lydia’s past catches up with her, will it destroy all she’d begun to imagine as she dreamed of starting over in Jamesport? Next after that is The Christmas Challenge which is also set in Jamesport. I don’t have official release dates for The Amish Wanderer or the other books yet. But as soon as I know, I’ll share. Coming next? Who knows? I have two ideas warring for attention—but which one gets told first, I don’t know! I lean toward one, then the other. They both want to be told. And now, I must get back to work. Thank you for visiting today and thank you so much for supporting my books. I do hope you’ll enjoy The Amish Firefighter! Happy Reading! Because of Him, ~ Laura ~ 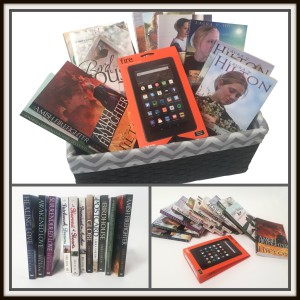 To celebrate her tour, Laura is giving away a basket that includes a Kindle Fire and a complete set of her books! Enter here: https://promosimple.com/ps/9bed