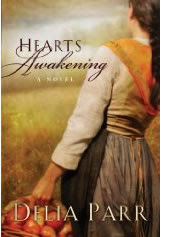 Ellie (Elvira) Kilmer has given all her life.  In her younger days she gave up a hope of a marriage and family of her own to take care of her infirmed mother.  When her mother passed away, Ellie was twenty eight years old, past marrying age for the most part during the 1840's.
Jackson Smith has been married, and is now a young widower at twenty eight raising two small boys on his own.  He married his first wife, even though he was in love with another woman, and that marriage proved to be a disaster.  His wife died in a horrible drowning accident, with her lover.  The scandal was very much a big part of why he chose to stay on his island away from everyone.
However both of these people are in a dilemna, Ellie has been banned from her cousin's home, because she found out about his indescretions and threatened to tell his wife, and Jackson fired his last housekeeper because she was cruel to his sons.  Jackson is pretty sure though when Reverend Shore arranges for Ellie to volunteer at Jackson's home for a couple of weeks, that he has a solution to his problem and to hers.
Will they make this work?  A marriage between two people who barely know each other, and who are both not sure it will work?  Will the boys ever accept Ellie as a mama?  This book is wonderful.  I cried along with Ellie as her frustrations were revealed, I laughed as she found joy in the everyday things that God had gifted her with.  You will NOT want to miss reading this book.  350 pages US$14.99 5 stars
This book was provided by Bethany House for review purposes only.