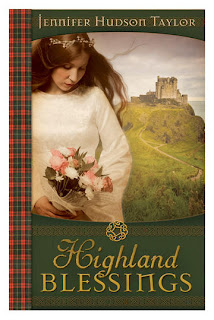 Set in 1473 in Scotland, Jennifer Hudson Taylor's debut novel is definitely a book you want to read! This novel was an exciting book to read.

Bryce MacPhearson, rides in on a large gray horse and sweeps the bride away, right in the midst of her wedding. A shock to say the least, but between two fueding families, a downright declaration of war it seems. However Bryce isn't trying to declare war, he is keeping a promise he made to his father, as his father died.

The MacPhearson's and the MaKenzie's have been fueding for a half century, and no one really knows why. Bryce's father and Akira's father pledged peace and their children to wed, in order to end the fued, but a warrior kills Bryce's father, and the fued continues. Bryce is determined to see peace and if kidnapping Akira and bringing her to wed his brother Evan, the cheiftan of his clan will bring that peace, so be it.

However things do not turn out as Bryce planned, but as God has planned, and Evan is killed. Bryce and Akira wed and both pledge to bring peace. However there seems to be a plot afoot to sabotage that peace. Akira's life is in trouble, and others die as the murderer draws closer and closer to Akira.

This book will keep you on the edge of your seat wondering how it will end, and what happens next, most definitely a book you will want to read and add to your library. Discussion questions for book clubs at the end, 298 pages $US 13.99 5 stars