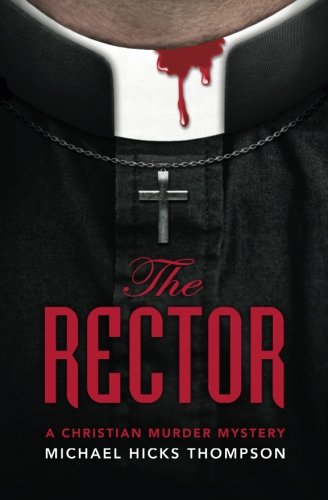 If Solo, Mississippi, had any claim to fame in the 1950s, it was due to the small town’s proximity to notorious Parchman Farm Penitentiary. The Rector is a thrilling mix of mystery, suspense, and Christian allegory. Solo may be a speck on the map, but a story as large as the heavens is playing out in its boundaries.

Before we get into my review I had a few questions I asked Michael, the author.

1) You've branded yourself as a writer of "Christian Fiction with Theology." Exactly what does that mean?

There's enough theology discussed between the rectors and various characters that I was able to develop a 6-week discussion guide for book clubs. However, most of my readers seem to be individuals, both men and women. The theology discussed ranges from "Where does evil come from," to "We don't have a soul. We are a soul. We happen to have a body." Hearing this has a profound effect on Martha. And, there are other theological discussions in the story. Perhaps the best way to describe it is what one reviewer wrote:


"
While The Rector works as a suspenseful murder mystery, Thompson also incorporates a spiritual and religious undertone to the story. This Christian Murder Mystery successfully intertwines faith in its plot twists and turns with surprising results. This small-town tale, set in the 1950s, delves into religion, spirituality and murder, and is exceedingly clever and cunning."

I'll let Richard L. Pratt, Th.D. answer that question. He wrote this review: "The Rector penetrates the facades of southern cultural Christianity to take us to the true gospel ... there is no Savior but Jesus and no salvation from the judgment of God but faith in Christ alone." That's the message I want to convey, but not in an "in your face" way; rather, in an entertaining story that Christians and non-Christians can enjoy. As one reviewer wrote: "
Quick paced, well written with a wonderful cast of characters, a good plot, a really scary bad guy and all the trappings of a good murder mystery… (even some humor)… The Rector will keep you entertained from start to finish and the biblical references aren’t in the least “preachy” and only help to enrich the story. Well done Mr. Thompson! Five Stars.

--From Reviewer Terry Lynn (unpaid and unknown to author).
3)Have you won any contests or literary awards for your writing?
Fortunately, I have. BEST GRAPHIC NOVEL and BEST INTERIOR DESIGN from the International Book Awards; Silver IPPY from the Independent Publisher Book Awards; A Bronze IPPY from IPBA; WINNER, best Religion | Fiction for The Rector from the Inde Exellence Book Awards; a Finalist in the Beverly Hills Book Awards and Mystery & Mayhem Book Awards. I may be forgetting some.

After earning a master’s degree in mass communication from the University of South Carolina, Michael started a one-man ad agency. It grew to 87 employees in two cities, winning numerous national and international creative awards. Michael sold his firm in 2011 and turned his attention to full-time Christian fiction writing. His latest novel is The Rector, available on Amazon in print, on Audio Book, and Kindle.

Michael was born in his mother’s own bed. He grew up in a town of 310 souls. He knows a thing or two about strong Christian women, alcoholic men, and Jesus. He and his wife of 44 years live in Memphis, TN, have three sons and four grandchildren. They call him “Big Mike.”

My Thoughts:
I had never heard of Michael Thompson until I read this book. I am looking forward to the next book. This book was suspenseful, and it was also full of the gospel. I didn't feel preached at, but I walked away with more knowledge of Christ. There is an allegory between the life of the third rector and Christ, but unless you were just really searching for it and knew it was there (which I did) you might not catch it. And personally, if you didn't catch it wouldn't take anything away from the story. I almost want to call this book a thriller, because it made me think of old horror movies (in particular Silence of the Lambs)  I did enjoy the story and was impressed with the skill the writer wove the story. The imagery was powerful and the story well written. The second rector, all I have to say is "WOW," he was masterfully written and created by this author. 4.5 stars from this reviewer.
This book was provided for review purposes only by the author, no payment was received for this review.