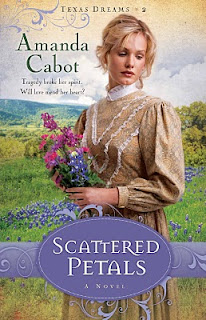 Priscilla Morton and her parents are on their way to Ladreville Texas, to see her brother-in-law widower of her older sister get married.  However just outside of San Antonio disaster strikes, when the stage coach is robbed and her parents are murdered, and Priscilla is raped and nearly killed.  Thanks to a Texas Ranger she is not killed, but she is definitely not the same young lady who started this trip.
In her brother-in-laws home, Priscilla discovers that the horrendous act of rape has left her bearing a child.  A bandit's child.  When Zach Webster steps forward offering to marry her, she is amazed, dismayed and scared, but knowing that Zach only is marrying her in name only, helps Priscilla make a hard choice.
Will she ever fall in love with this man who is willing to take another man's child as his own?  Will she ever be able to get past her fears and nightmares of being raped?  A story of shame, of pain and of faith, as Priscilla learns God did not leave or abandon her.
A small town divided by racial boundaries, and trying to overcome those boundaries is hard work, but Priscilla, Zach and others push hard against those invisible walls.  Will happiness be in the future for Priscilla and Zach?  Will they see their friends joined in happiness?  This book will have you hooked from the front to the ending.  The second of a series, however this book easily stands alone without reading the first book.  380 pages $US 14.99 5 stars
Available March 2010 at your favorite bookseller from Revell, a division of Baker Publishing Group.
This book was provided for review purposes only.